The gigantic industrial capital of Sichuan province offers a slice of the real China, including one of its best cuisines.

The main reason tourists come to Chongqing is to take a cruise down the Yangtze River to visit the Three Gorges Dam. Most take three to five days to do the quicker downstream cruise from here to Yichang, passing by wonderful rugged scenery, and visiting many interesting temples and towns on the way.

While much of the riverside cultural artefacts were lost with the construction of the dam, you can still see ancient and intricate carvings 45 metres below the surface at the unique White Crane Ridge Underwater Museum at Fuling, as well as learn about the river’s flora and fauna. There is also a bustling traditional market nearby, where you can experience the noise and colour of local life. 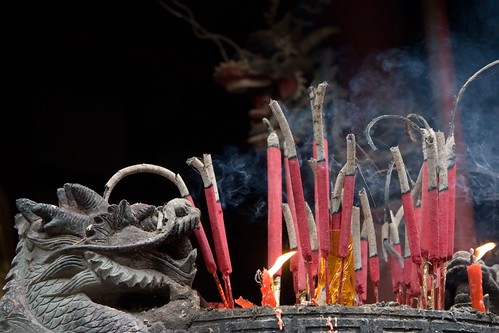 At Fengdu is the famous Ghost City, a complex of 27 Taoist, Confucian and Buddhist monasteries, temples and shrines that cling to a small mountain, dedicated to hell and the afterlife. As you trudge up hundreds of stairs to admire the fantastic views from the peak, you’ll pass through thick clouds of incense coming from temples decorated with colourful but grisly statues and paintings depicting the sufferings of those who get sent to hell.

After seeing the impressive Three Gorges Dam itself, visitors lastly head to the dramatic Xiling Gorge, known for its distinctive steep cliffs and thunderous water flows, a landscape made famous as the subject of many Chinese classical paintings.

Although Chongqing is a modern city, and formal historical and religious sights are thin on the ground, the great-domed Three Gorges Museum is the best place to learn about the city’s three-millennium history, culture and environment, as well as the famous dam project.

One old site that survived quite well is the Huguang Guildhall, which overlooks the river off the dockside Binjiang Lu. Built in 1759, it’s one of the city’s oldest surviving buildings and features a dozen or so highly decorated halls, atriums and ornate gateways, which now house a museum of Qing Dynasty trade. If you head downhill from here toward the river, you’ll also find one of the few remaining remnants of the old stone city wall.

During the Second World War, Chongqing served as China’s capital. It was where resistance to the Japanese was coordinated and the reason why few ancient buildings remain, due to the intense bombing it endured. The U.S. had its Chinese military headquarters here, and you can visit the well-preserved Former Residence of General Stilwell, the US commander, which is now a museum of the war, as well as the Claire Chennault Museum, dedicated to the U.S. volunteer ‘Flying Tigers’ air squadron that was key in the defeat of the Japanese.

Perhaps the most interesting historical figure from these parts is Qin Liangyu, the 17th-century imperial general famous for defending the Ming Dynasty from the Manchurians and rebels alike. She was proficient in both poetry and warfare and was the only female general of Chinese dynastic times. You can see her armour and weapons, as well as learn about her life, at the museum dedicated to her in nearby Shizhu County.

Chongqing is a city famous for food and the alleged birthplace of the modern hotpot, that most ubiquitous of Chinese dishes. A pot of boiling soup is placed at your table and the ingredients are brought on plates for you to dip in the liquid to cook yourself. Like most food here, Chongqing hotpot is extremely spicy, and if you can take the heat, try one of the traditional hotpot places on Wuyi Road.

If those are a bit too earthy for you, head to Waipo Qiao in the swanky Metropolitan Tower Mall, where ingredients arrive at your table on little boats that flow through the restaurant on a water conveyor belt. It’s also a good place to try other famous Chongqing dishes, such as gan guo (a dry hotpot that is usually less spicy than the normal one), kung po chicken (a spicy chicken dish with peanuts), mapo tofu (fermented tofu heavily spiced with Sichuan pepper) and suan cai yu (river fish in a sour soup).

Chongqing is also a famous for its street food, such as xiaomian (spicy noodle soup), or for cooling down in the summer, the cold noodle dishes liangmian and liangpi. In the centre, the best place for a whole range of food is the faux-Ming Hongya Dong complex on Cangbai Road in the north of the peninsula, which not only offers most types of Chongqing food but foreign restaurants and views across the river.

There are several incredible tourist spots within a few hours’ drive, and tours can be arranged through your hotel. To the west of the city are the Dazu Rock Carvings, an extensive series of intricately carved Buddhist, Taoist and Confucian cave shrines made during the Tang Dynasty. Protected by its inaccessibility during the Cultural Revolution, this is the best-preserved example of rock carving in China and a World Heritage Site.

In the southwestern suburbs of Chongqing, an example of living religion can be found at Huayan Temple. Situated within a well-maintained park, it’s a tranquil spot and an easy escape from the bustle of the city. Built around a placid lake, this complex of red-painted temples, pagodas and pavilions also features a giant, golden statue of the Buddha surrounded by a field of lotus flowers. A working temple, it’s always busy with worshippers lighting incense and praying, as saffron-robed monks go about their routine, giving it a relaxed and contemplative air.

To really get out into nature, hire a taxi and drive 140 kilometres southwest to Simian Mountain near Jiangjin City, one of the loveliest and yet little-visited forest parks in China. Located within the mountains between the Chaba and Feilong Rivers, the delightful wooded slopes are home to hundreds of plant and animal species, many endangered, with the rugged, wooded slopes punctuated by bubbling streams, lakes reflecting the blue sky, and more than a hundred waterfalls, the highest of which is 150 metres tall.

Besides the usual international brands found in the pedestrian Jiefangbei area at the heart of the city, there are a couple of good places for shopping for souvenirs. The Hongya Dong complex features a mass of night stalls where searching for mementos can be combined with a lovely dinner. Otherwise, head out to the ancient village of Ci Qi Kou, whose narrow, lantern-bedecked lanes feature traditional wooden buildings that house numerous souvenir stalls, restaurants and tea houses. Just a few kilometres west of the centre, it often features on day-tours of the city thanks to its photogenic qualities. Famed since Ming times for its porcelain, it’s also a good place to buy naïve-style Qijiang farmers’ prints and dark Chongqing lacquerware.

While the city has its share of international luxury hotels such as Westin, Marriott and Sheraton on the main peninsula, many foreigners choose to stay in one of the hot spring resorts that can be found in and around the city. Inside the city, the most central is Rong Hui Hot Spring City, though there are dozens located in peaceful scenic areas farther outside, such as the luxurious Banyan Tree Chongqing Beibei at the foot of Qingyun Mountain.