What to do in Colombo, Sri Lanka

Behind its everyday hustle, the commercial capital of Sri Lanka is a vibrant mix of colonial heritage and modern hideouts

Colombo is home to a rich history, written all over the eclectic structures and heritage buildings in Colombo Fort. The charming area is also the modern commercial hub, welcoming new establishments such as the World Trade Center (WTC). Opposite the twin towers of WTC, you will spot Old Colombo Dutch Hospital. Built in 1681 and later restored in the post-civil war era, the oldest establishment in Colombo Fort offers a glimpse into colonial architecture. The former hospital complex reserved for Dutch officers is now a happening shopping precinct with renowned upscale restaurants such as Ministry of Crab.

Nearby, you can find the crumbling ruins of the Former General Post Office. Established by the British, the first official post office in the country is located opposite the President’s House – formally, King’s House. This illustrious housing complex, which was once the residence of British governors, is now occupied by the current President Maithripala Sirisena.

Fort offers many interesting nooks and corners, but don’t miss the Last King’s Jail Cell. It was where King Sri Wickrama Rajasinghe was imprisoned before he was deported to South India. The king ruled in Kandy, the last kingdom of Sri Lanka till 1815, before he was captured by the British army. On Chatham Street, you will find an elegant Victorian tower, Old Colombo Lighthouse, now turned into a large clock tower. Next, walk into The Central Point. The abandoned building was refurbished after the civil war and now houses a beautifully designed money museum. Here, you can learn about currencies used in the early periods of Sri Lanka.

During the day, Colombo buzzes with activity. A self-guided walking tour will give you a glimpse into the ordinary life of Colombo. Start your tour at Khan Clock Tower. The hard-to-miss clock tower was built by a Farsi family who migrated to Colombo from Mumbai. It marks the entrance to Pettah, a sprawling marketplace. Pettah is a maze, and you will have to walk on narrow pavements as porters and cart wheelers manoeuvre past you, and shoppers bargain for a good price. You can find shops filled with anything and everything, from imported chocolates and golden wedding wear with intricate details to funky toy crabs.

There’s also a large vegetable and fruit market, shaded by a tin roof. Get a thambili (king coconut) from a street vendor. Native to Sri Lanka, king coconuts have a large orange shell and naturally sweetened fresh water, perfect to beat the tropical heat. On 2nd Cross Street in Pettah, you will find Colombo’s most Instagrammed building. Jami Ul-Alfar mosque is painted in an impeccable red-and-white design, explaining its popular name, The Red Mosque. Dominating the busy cityscape, its minarets tower over the neighbourhood streets. A holy place of worship for Muslims, the mosque has pomegranate-shaped domes, different from the traditional onion shapes found elsewhere.

Make a brief stop at Wolvendaal church. Built during the Dutch colonial era, the church is impressive with its high ceilings, old furniture, and floors surfaced with ornate tombstones. Before you end your tour, hop on a tuk tuk to visit the secondhand bookshops in Colombo. The long line of bookshops on DR Wijewardena Mawatha is flooded with used books, from Nicholas Sparks to Shakespeare classics and old Reader’s Digest magazines, sold for a quarter or half the retail price.

Like other big cities, Colombo has a modern, chic side to it. Cinnamon Gardens or Colombo 07 is sheltered by large, expansive trees. Lunch in Upali’s by Nawaloka. The homely restaurant dishes up delightful local cuisine. Order rice and curry, with a fiery-red Jaffna Crab Curry, and Hathmaluwa (a seven-vegetable curry). Be sure to try Sri Lankan buffalo curd with kitul treacle (a sugary syrup extracted from the kitul palm) for dessert. Opposite Upali’s lies Viharamahadevi Park, a sweeping park covered with trees. Nearby, you can find the Nelum Pokuna Art Street, offering a space for young and upcoming local artists. Most of the work here are canvas paintings, depicting the vibrant culture of the island.

Drop by Saskia Fernando Gallery to get a glimpse of the contemporary art scene in Colombo.  The spacious, bright establishment houses modern work of Sri Lankan artists, such as Muvindu Binoy and Firi Rahman. For souvenirs, check out Lakpahana. You can buy ornaments, jewellery, scarves and bags designed by craftspeople from across the island. Good Market Shop is located at the same premises. This do-good establishment sells organic produce, herbal soaps, shampoo bars and other zero-waste items. When evening nears, chill at Café Kumbuk with a cup of Sri Lankan Soul Coffee and order the Tropical Hot Cake, a large pancake topped with granola, fruits and salted caramel ice cream.

If you have another day in the city, board the coastal line train to Bentota from the Fort Railway Station. The train passes through palm lands, fishing hamlets and lagoons covered with mangroves, offering a vast view of the Indian Ocean. Once in Bentota, visit Lunuganga Estate. The six-hectare garden is the country estate of Geoffrey Bawa, the renowned Sri Lankan architect who was the pioneer of the design concept, tropical modernism. It sits by the banks of Dedduwa Lake, a far-stretched lake with whimsical beauty. Lunuganga houses several aesthetic structures and small gardens within the main garden. The spacious bungalow has comfortable reading nooks with plenty of natural lighting. 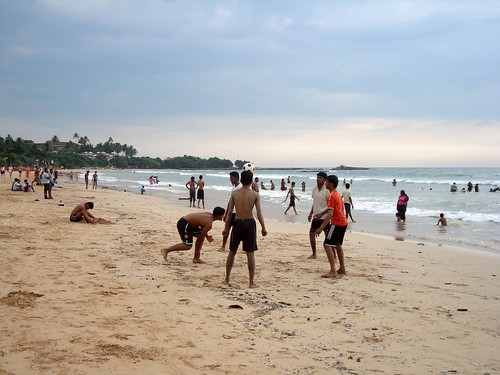 Next, hop on a tuk tuk. A 15-kilometre drive through the narrow, tree-clad countryside streets, past green paddy fields, will take you to the Brief Garden. The former home of Bevis Bawa, elder brother of Geoffrey, this luscious jungle-esque garden-bungalow is an architectural masterpiece. Outside in the intimate garden, you will find a pool and a patio. Inside the house, vintage sculptures designed by Bevis himself dot the large space, while its walls are covered with murals by local artists. Before you board the train back to Colombo, enjoy some time at Bentota Beach, a long, wide-open sandy beach with picturesque views.

The main language spoken in Colombo is Sinhala, though in some parts of Colombo, Tamil too is widely spoken. In Sinhala, use Istuti to say thank you. Mata therenne neh is ‘I don’t understand’. If you want to know the price of an item, point to it and ask, meke gaana kiyada. Similarly, when you’re on a bus or a tuk tuk with no meter, ask keeyada to know the price.

PickMe is the local alternative to Uber. The global app is widely functional in Colombo, but it’s handy to have PickMe on your phone, especially when an Uber is unavailable. For local restaurant tips, events and other up-to-date information, head to YAMU, its online site yamu.lk or its app.

Colombo has hot, sweaty weather throughout the year. Wear loose cotton pants, tunics and breezy maxis. Keep things colourful for photos. Carry a shawl and cover up before you enter temples. During monsoons, from June till October, torrential downpours occur and last from a few minutes to a few hours. Carry an umbrella or a rain jacket to seek shelter from the rain.