These architectural marvels are more than just a religious sanctuary

In Malaysia, where the population is predominantly Muslim, mosques are more than a place of worship – they showcase the country’s rich culture, art and heritage. Buildings often blend Malay, Arabic, Moorish and even British influences into their designs, making them a true spectacle to behold. Here are seven beautiful mosques around Malaysia that will take your breath away.

Located within the Islamic Heritage Park in Terengganu, the Crystal Mosque is widely considered to be one of Malaysia’s most spectacular-looking mosques. Built out of steel and glass, the mosque’s well-earned name comes from its shiny domes and glistening azan (call to prayer) towers, which reflect the river surrounding the building. The mosque is able to accommodate up to 1,500 worshippers, and going with its modern exterior, comes complete with Wifi and IT facilities. It is also a popular venue for wedding photoshoots. Within the royal town of Kuala Kangsar in Perak is the majestic Ubudiah Mosque, a fine example of 20th century Indo-Saracenic Revival architecture. The mosque was commissioned by the 28th Sultan of Perak after recovering from a bout of illness. Its most striking feature is its giant golden dome and minarets. Legend has it that during its construction, two elephants – one belonging to the Sultan and another to Raja Chulan, a member of the royal family – became embroiled in a fight, damaging the imported Italian marble tiles. The building was finally completed in 1917. What the Al-Hussain Mosque in Perlis lacks in size, it makes up for with beautiful architecture. Built by the sea, it is also known as the ‘floating mosque’, as the building looks like it is sitting on top of the water when the tide is high. The best time to visit would be after dark, as the mosque is illuminated from within, with light shining out from its colourful stained glass windows. Sitting pretty on the banks of a manmade lake, the Putra Mosque is one of two grand mosques in Putrajaya, Malaysia’s administrative capital. Pink is the main theme throughout the mosque, as its dome is constructed of rose-tinted granite, while the interior features a similar shade from floor to ceiling. Particularly impressive is the main prayer hall, which has 12 columns and an intricately decorated ceiling painted in geometric and floral patterns. The mosque can accommodate up to 15,000 worshippers. Among the many mosques in Malaysia, the Sultan Abu Bakar Mosque in Johor is perhaps the most unique, in that it draws heavily from colonial English Victorian architecture. Built in the 19th century, the mosque’s look reflects the Anglophile sentiments of the era, when Malaysia (then Malaya) was under British rule. Look closer, however, and you will notice exquisite Moorish and Malay architecture blended into its design. The main prayer hall is supported by arches and Roman-style columns, with an opulent overhanging chandelier. At the Al Bukhary Mosque in Alor Setar, Kedah, it’s easy to feel as if one has been transported to the grand courtyards of Istanbul or Tehran. Inspired by buildings in Turkey and Iran, the mosque has seven top-shaped domes in vivid shades of blue and turquoise, the main of which features Arabesque motifs. Running through the front entrance is a reflective pool of water, and the grounds are decorated with palm trees. A five-tiered main archway represents the five pillars of Islam. The Sultan Salahuddin Mosque holds several records, being the largest mosque in Malaysia and the second largest in Southeast Asia. It is also home to one of the world’s largest mosque domes, measuring over 51 metres in diameter. The blue colour of the dome and minarets have earned it the nickname the “Blue Mosque”, while the windows feature matching blue stained glass, giving the interior a matching cobalt hue. Verses from the Quran in decorative khat calligraphy adorn both walls and the inner curve of the dome. 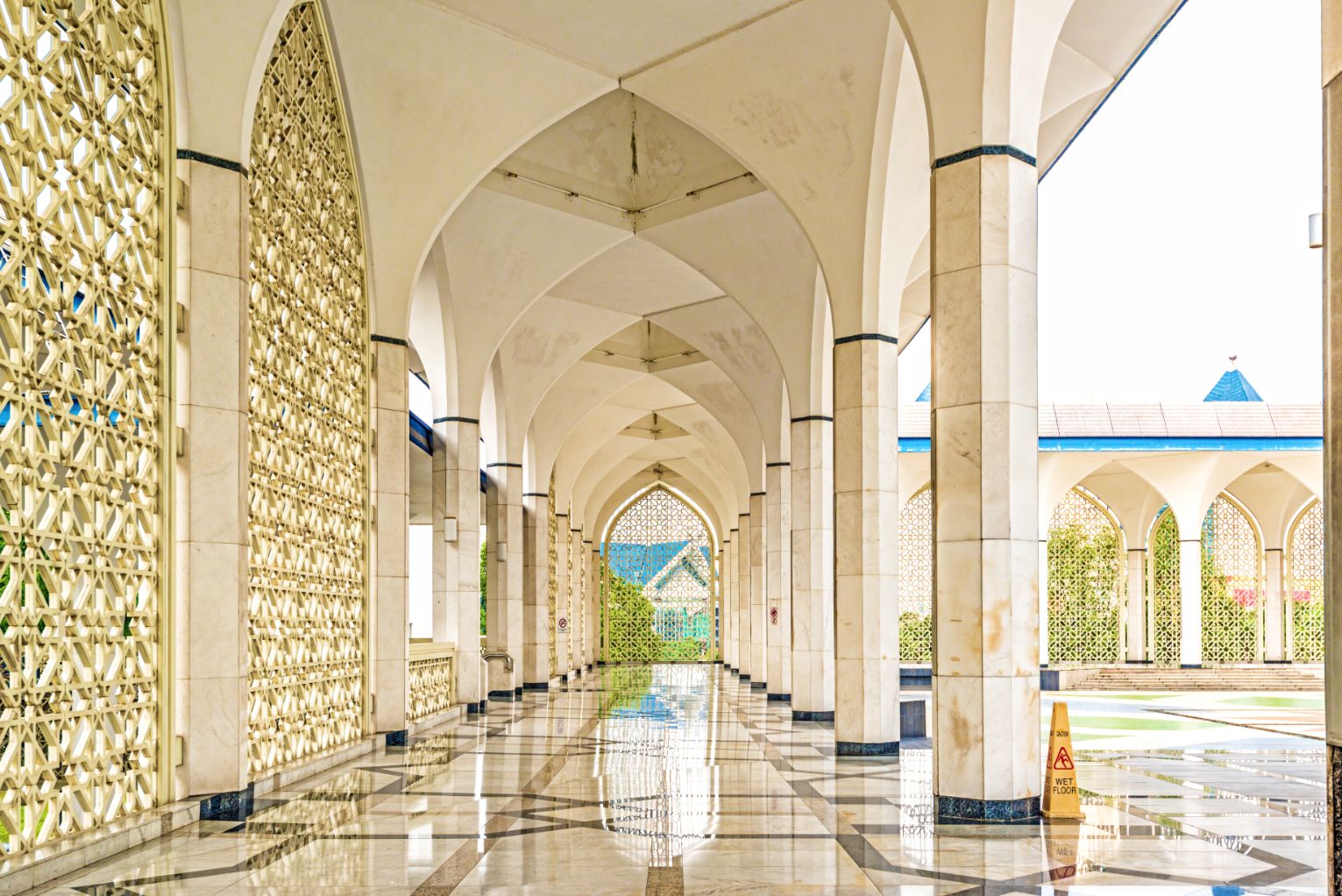 8 noteworthy museums opening around the world in 2021