Where to stargaze in New Zealand

New Zealand is home to the world’s largest Dark Sky Reserve, where astrotourism takes visitors to galaxies far, far away

Close to midnight, on the summit of Mt. John, in the middle of the Aoraki Mackenzie International Dark Sky Reserve, a dozen stargazers huddle in arctic jackets, clutching hot chocolate, excited to watch what our guide calls “the greatest light show in the world.”  Our infrared torches allow us to navigate the rugged mountain top, home to some of the most powerful telescopes in the world, without diminishing the view that is fast emerging overhead.

As the sky darkens from indigo to inky black, an eerie quietness descends upon the mountain and a spectacular starlit night reveals itself.  The clarity of the stars is nothing short of extraordinary, and with each constellation appearing close enough to touch and our own galaxy, the Milky Way, arching impressively overhead, it’s easy to see why astrotourism in New Zealand is such an out-of-this-world experience. Our guide for the evening with Tekapo’s Dark Sky Project is Holly McClelland, an astrophysics major and researcher with the University of Canterbury.  Guide by night, her day job involves looking for exoplanets, planets outside our own solar system, to better understand the formation of planetary systems. Since 2004, 25 exoplanets, some of them “earth-like” have been discovered, deep in space, from the Mt. John Observatory.

McClelland begins by giving us a brief history of our surroundings, the Mackenzie Basin, a 4,300 square kilometre area on New Zealand’s South Island, encapsulating Aoraki Mt Cook National Park, home to the country’s highest mountain, and the villages of Tekapo, Twizel and Mt Cook. It was declared a Dark Sky Reserve in 2012 and remains one of only eleven in the word, the only one in the southern hemisphere and the largest on the planet. It was also the first to be granted gold status, meaning there is virtually no light pollution whatsoever. Since achieving Dark Sky Reserve status, light pollution has been carefully controlled in the whole Mackenzie Basin region, though the town of Tekapo has been powering down its street lighting to better see the stars since the University of Canterbury Mt John Observatory was built in 1965. Low power sodium lighting has been enforced, by law, since the 1980s. Stargazing certainly isn’t new here, but it is flourishing. 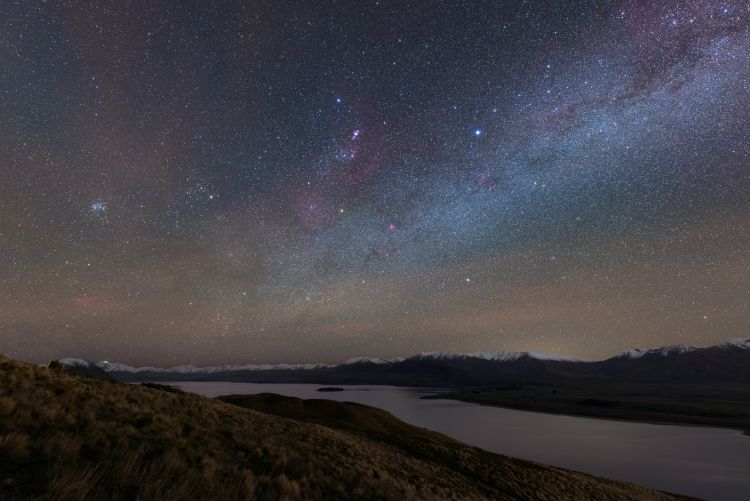 In July 2019, Dark Sky Project opened a state-of-the-art astronomy visitor centre on Tekapo’s lakefront to cater to the 200,000 stargazers the town expects annually. Its centrepiece is an observatory dome which houses the famous 125-year-old Brashear Telescope, a nine-metre-high Victorian masterpiece, famously used in the 1800s to prove the existence of polar icecaps on Mars.

“Our intention is to create a home for astronomy here in Tekapo,” explains Dark Sky Project co-founder Graeme Murray. “It’s estimated that 80 percent of the world’s population are now unable to see their own starry skies due to light pollution, which makes the preservation and promotion of locations where our stars can still be seen so important.” Before venturing to peer through the observatory’s five indoor and outdoor telescopes, McClelland guides us through the southern winter constellations, and we crane our necks skyward to join the stars she points out with a laser pen: The Crux, also known as the Southern Cross, which is frequently used for navigation, Orion and his dog, Canis Major, a constellation that contains Sirius, the brightest star in the whole sky, and Taurus, the bull.

Near Taurus, she points out Pleiades, a cluster of seven stars that, in Maori culture, is called Matariki, which means “the eyes of God”.  Its rising heralds the start of the Maori new year, says McClelland, and each star represents a specific part of Maori life.

“Stargazing and astronomy are rooted in all of our cultures from as far back as we know,” she explains, “which is why it continues to be relevant and important today, both from a cultural perspective and a scientific one.” McClelland also points out other celestial sights, visible without a telescope, including Coalsack Nebula, a dark cloud of gas and dust, located 600 light years away, and Andromeda, our nearest neighbouring galaxy, which is visible in the Southern Hemisphere from October to December. Located a staggering 2.5 million light years away, Andromeda is the farthest object that can be seen from Earth with the naked eye.

Through telescopes, including the MOA telescope, the largest in New Zealand, we eyeball Jupiter, Saturn and its rings, and the swirling colours of Orion Nebula, a star-making ball of gas and dust, which looks like a science-fiction special effect. We also get a closer look at the famous Jewel Box star cluster, distinguishable with the naked eye but dazzling through a powerful lens. As our mountain-top stargazing experience comes to a close, McClelland sweeps her arm overhead and asks us to take a moment to consider a world without starlight; because she says this is very much a reality for much of the population today. “Millions of children across the world will never see a star, yet alone appreciate the Milky Way,” she says.

“The sad fact is that light pollution is causing all of us to lose our connection to the night sky, which is a deeply primal connection.”

“Our ancestors have looked to the stars for centuries for navigation, folklore, seasons and more. The stars are a connection to the soul, to the past, to the world.  If we lose that – and we are losing it – we lose something far more important than a view.”

For the Star Seekers: Where to stargaze in New Zealand

Unique stargazing experiences are cropping up all over New Zealand. Find the ultimate vantage point to view the starlit skies of the Southern Hemisphere:

1. Soak and Stargaze at Lake Tekapo

Those who wish to float among the stars can do so at the foot of Mt John, on the outskirts of Lake Tekapo town, where Tekapo Stargazing offers the only guided, hot pool stargazing experience in New Zealand.

2. Sip or Snap and Stargaze in Wairarapa

An hour north of Wellington, amid the wineries and vineyards of the Wairarapa region, you can stargaze with a glass of Sauvignon Blanc or take an astro-photography workshop with custom stargazing tours from Under the Stars.

In New Zealand’s oldest national park, Tongariro National Park, the 19-kilometre Tongariro Alpine Crossing is one of New Zealand’s most popular great walks and an incredible backdrop to a symphony of stars. Night hikes not only allow you to stargaze amid the mountains, they’re also a great way to beat the crowds and avoid the summer heat.

4. City and Stargaze in Auckland

If you’re passing through Auckland, you needn’t miss out on the stars of the Southern Hemisphere with a visit to the Stardome Observatory and Planetarium. Daily guided viewings allow visitors to take in the celestial sights using the facility’s powerful telescopes.

5. Sea and Stargaze on Stewart Island

Immediately south of South Island lies Stewart Island, known as Rakiura in Maori, which translates as glowing skies. Last year, the entire island powered down its street lighting to afford visitors a better view of its already magnificent night sky. This windswept island, home to just 400 residents, is one of the best places in the Southern Hemisphere to view the Southern Lights.

For a true wilderness stargazing experience, Great Barrier Island, 100 kilometres east of Auckland, is an off-grid island that harnesses its power from the sun and the wind. With no street lighting whatsoever, Great Barrier Island has established itself as a must-visit for extreme stargazing. Weekly ferries depart from Auckland.