Borneo’s fabled waters and jungles are under threat, but thankfully, organisations are working to save them 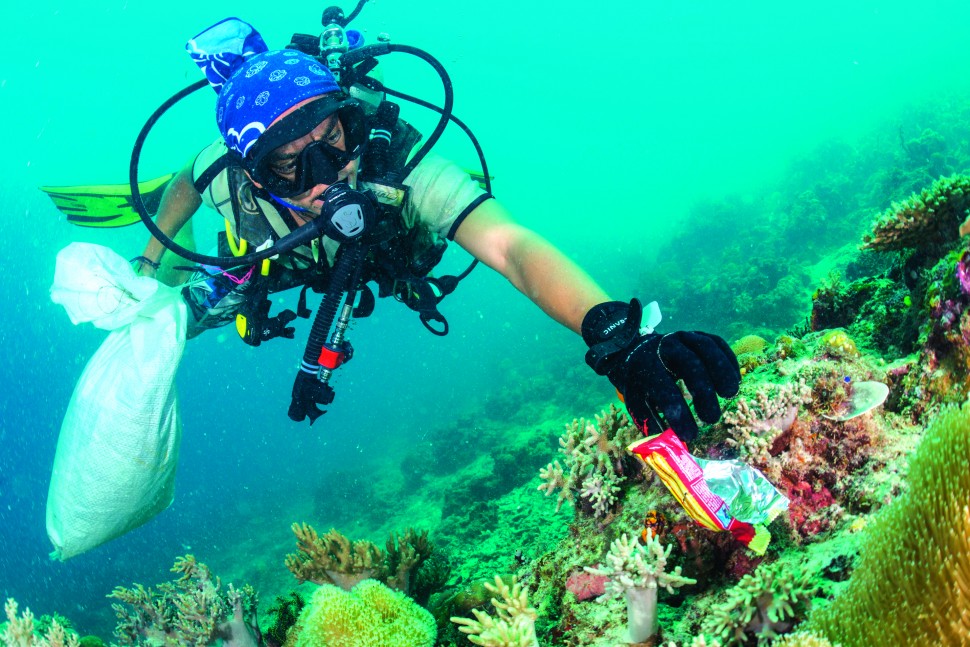 With a waft of his fins, Dave McCann makes his way from one patch of coral to the next, scouring it for signs of litter. Spotting yet another instant coffee sachet, he plucks it off a piece of table coral, before stuffing it into a large bin bag that bellows in the current. One down, 5.25 trillion to go.

Scuba Junkie’s Environmental Officer is not alone. On the reefs just off Mabul Island in Malaysia’s Borneo state of Sabah, he is joined by other Divemasters and guests, who clutch nappies, plastic bottles, sweet wrappers and even a washing machine, part of an estimated trillions of pieces of marine debris.

Worldwide, plastic production has increased twentyfold since 1964 and is expected to double in the next 20 years and quadruple by 2050. With much of this making its way into the sea, the effects on marine life are catastrophic. An estimated 270,000 tons of plastic float on the surface of the ocean, causing around 100,000 animals a year to die from ingestion and entanglement.

A report by the Ellen MacArthur Foundation warns that by 2050 there could be more plastic in the ocean than fish. We are currently contemplating a planet with more trash than turtles, more wrappers than whales, more bottles than bottlenose dolphins.

Founded just over a decade ago, Scuba Junkie has grown from a one-man-band, based out of a small concrete office in Sabah, to one of the Southeast Asia’s most successful dive operators. Scuba Junkie now has bases in Kota Kinabalu, Mabul and Semporna in Sabah, and Komodo and Derawan in Indonesia.

Its growth can, in part, be attributed to its emphasis on environmentalism. Along with regular reef and beach clean-ups, Scuba Junkie holds annual Turtle, Marine and Shark Weeks, which promote community engagement and education. It also has a turtle hatchery programme and has even formed its own environmental arm, SEAS.

“Our customers have been very responsive to our green policies and love getting stuck in when they visit us. They know we can’t just keep pillaging from our oceans – we need to give back or there won’t be anything left for us to enjoy,” says co-founder Ric Owen, his views illustrating why Scuba Junkie offers a blueprint for the global dive industry.

As Dave and his band of workers haul their bulging bags of trash back to the dive centre, the tourists appear quietly satisfied with their morning’s work. On a global scale, they have barely scraped the surface: the plastics machine is relentless and tomorrow more will need collecting. Yet if every dive operator showed the same commitment to conservation, it would be a significant step in the right direction.

With rainforests that are home to elephants, sun bears, clouded leopards and more, the jungles of Borneo are some of the most ecologically rich on the planet. They are, however, among the most threatened. Only half of Borneo’s rainforests remain, down from 75 percent in the mid-1980s.

The primary driver behind this deforestation is the agriculture industry, particularly palm oil. Found in around 50 percent of products on supermarket shelves, palm oil is a highly versatile and ubiquitous vegetable oil. While it forms an important part of Malaysia’s economy, its profits don’t come without costs.

The poster child of Bornean conservation is the critically endangered orangutan. As their habitat disappears, populations have plummeted. Bornean orangutan numbers are estimated to have fallen 50 percent over the past 60 years, and a whopping 25 percent in the last decade alone.

Founded in 1964, the Sepilok Orangutan Rehabilitation Centre offers a safe home for up to 80 confiscated orangutans that were victims of deforestation and the illegal pet trade. The facility also provides much-needed medical care, while a rehabilitation programme teaches young orangutans how to forage and climb and other skills necessary to survive in the jungle.

On a strip of protected land on the edge of Kabili Sepilok Forest Reserve, guests can traverse the forest to a viewing platform. Here, they can observe the animals in a semi-wild location, and even watch them being fed twice a day. It’s of little surprise that this is one of Borneo’s most popular tourist attractions.

In The Heart Of The Jungle

While the Sepilok Orangutan Rehabilitation Centre offers a snapshot into conservation efforts, another institution offers opportunities for a more in-depth insight. With its headquarters on the banks of the Kinabatangan River, Danau Girang Field Centre (DGFC) aids conservation through scientific research.

At this remote research centre, students converge to study Borneo’s unique blend of charismatic creatures. They use a mix of state-of-the-art gadgets combined with rough-and-ready field-developed tools to assess, track and observe animals in their natural habitat.

Local researcher Elisa Panjang is only the second person to have ever tagged a Sunda pangolin. Meg Evans spends her days laying traps for her beloved civets, while primatologist Danica Stark often waits for slow lorises to emerge out of trees at dusk.

Then there is reptile expert Richard Burger: he gets his kicks from jumping off moving boats on top of pythons, and then taking stool samples, which offer valuable insights into an animal’s diet, potential diseases and more. Other researchers spend their days analysing images from camera traps, preparing satellite tags, writing up reports, and more.

DGFC attracts both local and international volunteers with an interest in science and conservation. What DGFC lacks in luxuries, it makes up for in experiences: volunteers help scientists in their daily pursuits as they gain an intimate insight into Borneo’s wildlife and the threats they face.

“During their stay, volunteers will get a completely new perspective on the jungle,” says founder Dr. Benoit Goossens. “Where else can you experience these animals out in the wild and know that you’re contributing to science at the same time?”

Data produced by DGFC is helping to fill in the blanks surrounding Borneo’s wildlife and mitigate human-animal conflict. Dr Goossens and his team work closely with the government to create policies to protect wildlife. By visiting centres like DGFC, Scuba Junkie and the Sepilok Orangutan Rehabilitation Centre, guests are helping to secure a future for Borneo’s wildlife. They might also have the experience of a lifetime in the process.

How You Can Help